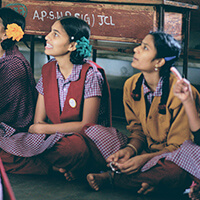 donors
How This Works
Contribute sanitary pads for underprivileged girls & women
Price - Rs. 1.75 per pad (includes shipping)
Each set contains 4 books worth Rs 100
Gallery
Show More
Less
Program's Impact
"It's a great step to break one of the greatest taboo among the society."

- Partner NGO Chal Chaley
"Stop the Spot is really a nice campaign that positively impacts the lives of many girls and women who can't afford sanitary pads during their periods."

Congratulations! Your request to participate in the tour to Akshaya Patra's kitchen has been confirmed. Kindly note that contact person for your tour shall be
and
You shall receive details over an email as well.
Supported by

TCIEXPRESS is a specialist and leader in Express distribution in India. Established in 1996, as one of the foremost divisions of its parent company Transport Corporation of India Limited (TCIL), TCIEXPRESS demerged with a vision to become a leader in door-to-door express logistics player in India that places customer satisfaction above all. TCIEXPRESS has been growing meticulously with its wide distribution network locally and globally with its current 550 owned centres covering more than 40,000 locations. TCIEXPRESS is well equipped to offer time-definite solutions to 670 out of 675 districts in India with its wide spectrum of services comprising surface, domestic and international air, e-commerce, priority and reverse express services. A separate division for CSR initiatives known as TCI Foundation, it believes in partnering with society at large with the aim of making life better for all. Driven by an urge to make a change, a few schools were built, a couple of financially supported dispensaries were started in the then considered remote areas of the country, initiatives were taken to mobilize women and facilitate them with skills which enabled them to contribute to the family income in areas where women were treated as lesser mortals condemned to live a life of oppression and denial.

#STOPtheSPOT is being supported by Wonderize sanitary Napkins. #hereforher is a social campaign for the empowerment of women undertaken by Wonderize. The mission behind #hereforher is to promote female menstrual well being by educating and increasing awareness about the importance of maintaining proper personal hygiene. To facilitate easy access to menstrual hygiene products everywhere. Wonderize Sanitary Napkins visions for India where every single women is ensured menstrual health, happiness and dignity.

Does Snapdeal earn profits from this initiative?

This is a not for profit initiative by Snapdeal. Snapdeal does not earn any profits from this initiative.

The current menstruating population of India is nearly 455 million and of those 88% do not use any sanitary products during their periods. This results in a drop of 31% in productivity levels of working women and almost one in every four adolescent girls in the country, quits school post reaching menarche. Further improper menstruation hygiene management leads to 70% increase in incidence of reproductive tract infections owing to poor menstrual hygiene. Contributions made by you can help underprivileged girls and women in India live a healthy as well as a dignified life.

What are the dimensions of these sanitary pads?

One pad is approximately 6 grams in weight, has a length of 230 mm and a width of 80 mm

How does this campaign run?

Users come online on Snapdeal and contribute amount for sanitary pads. Once contributions are received, an order is placed to Jayaashree Industries. The delivery is made by TCIEXPRESS to NGOs across India.

Do I need to pay additional shipping charges for the orders that I place?

No, shipping is done free of cost and the charges for the same are borne by our logistics partner TCIEXPRESS.

How many sanitary pads can I contribute?

There is no constraint. Please contribute as much as you want.

How will I get updated about the status of my contribution?

Who would receive the sanitary pads that I will contribute?

The sanitary pads contributed by you will be delivered to multiple NGOs across India as per their requirements.

When will NGOs receive sanitary pads contributed by me?

The pads are first consolidated at vendor's location and then dispatched to partner NGOs. Once you have made your donation, you could expect pads to be delivered within 2-3 weeks.

Can I claim tax exemption through these donations?

As per Government rules, product donations are not covered under tax exemptions.

Whom do I reach out to for any further queries?

You could reach out to Sankalp Chhabra at sankalp.chhabra@snapdeal.com or call him at 8095931444.

What is the source for statistics displayed on the page?

: "Around 23% of girls drop out after reaching puberty" and "only 12% of India's menstruating women use sanitary napkins" taken from International Research Journal of Social Sciences, "Scope and Opportunities for Menstrual Health and Hygiene Products in India" (11th June 2016).

Return form will be sent to your email Id:

Subscribe to regular alerts for deal of the day on your favourite categories.